A Network of Freethinkers & Their Resources

It’s time to name what a group or bunch of logical fallacies listed together would be called.   Like a murder of crows, or gaggle of geese, what makes sense for fallacies?  Below is the growing list suggested by a cross section of folks who deal with fallacies daily.  I will post polls on @freeatheism timeline to have an informal vote. Find them soon with #FApolls on twitter.  Meanwhile suggest more creative and apt ideas on twitter to @freeatheism.

(See UPDATES below the article)

Over the past week or so I started getting my @freeatheism account locked by twitter support for tweets that were THREE years old!  First was 12 hrs, then two 12’s in a row and today 7 DAYS!  There was some name calling in a back and forth debate way back then, i admit, but highly questionable as being a violation to report.  But 3 years ago? WTF?!  The accounts who dug these up to report (the @ names in the tweets) were @Sacerdotus, @scdtvs and @Catholicgadfly… well known to ALL be run by the Sacerdotus acct, the sociopathic, catholic wannabe priest, failed author living his mom’s basement.  This link details his accounts and past hateful, immoral and vengeful behavior:

Here is my own page with video evidence of a twitter search, where we caught @SCDTVS (Sacs primary acct then) using his @CatholicGadfly puppet.  https://freeatheism.org/sacs-oops/

If there was any doubt that @NYCLATINO2017 was also a Sac puppet or at least behaving like Sac, 1 innoccuous tweet to him yesterday and BAM it got reported and I get locked again… A 7 DAY LOCK!  Of course NYC/Sac deleted all of his violations… his whole side of the conversation, to avoid being targeted back!  I realized then that twitter support is being used to oppress by a multiple account violator!  Am I an easy lockout target because of my religious preference in my @ handle?!?

So here are his known accounts (below)… I advise to erase all tweets to them as Sac is a vengeful prick and HE WILL MISUSE THIS TOOL OVER AND OVER.  If you still have tweets FROM any of these accounts, by all means reassess them and see if they are a violation.  Legitimately report him of course if deserved, even though a mass reporting might fix this problem.  Other wise, please tell twitter to get this sociopath off of twitter for good this time.

If you go give this asswipe a thrashing be damn sure you delete your tweets!!  FURTHER please inform @twittersupport on my behalf ( @freeatheism) that a multiple account violator is targeting me, abusing the reporting process… and they are falling for it!  (See update below)

This is oppression that @twittersupport is participating in and enabling, plain and simple.  Please share this post, thanks.

Thanks for reading. -Artie

UPDATE: 11 hours later, my appeal was heard and accepted.  My account restored.  The warning stands though… stay away from Sacerdotus and his puppets.  Protect your account from this multi-account sociopath twitter abuser.

UPDATE:  Sept 21st.  I just received an email with a fun image in it.  Apparently Sacerdotus is in time out per his own violations.  Even though Sac’s primary account doesnt get its nose very dirty, somebody found something twitter doesnt approve of.  And yes @Sacerdotus has been quiet for a day! Lol. 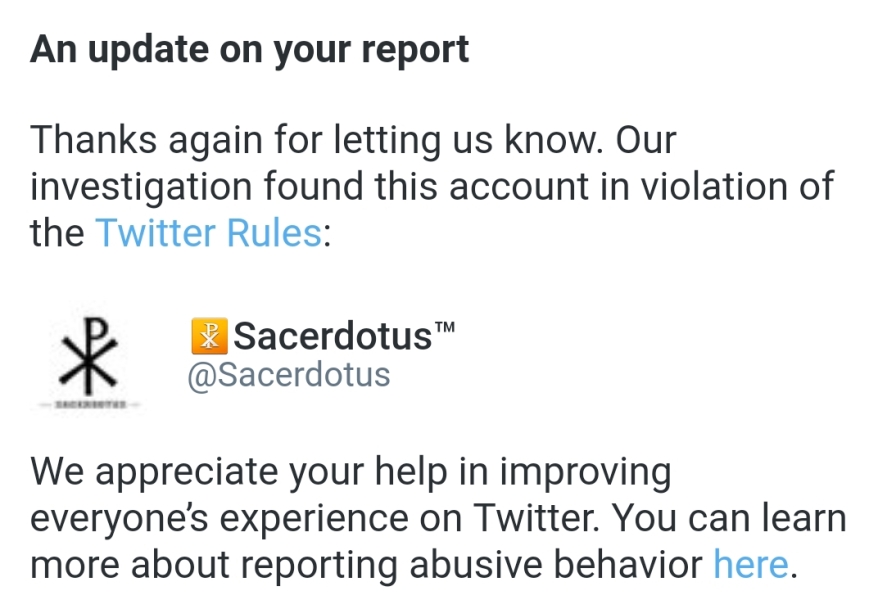 UPDATE:  Sept 10th.  @iamatheistgirl contacted me about being put in lockout for a tweet containing a harsh word “cunt”, from A YEAR AGO.  Clearly this tweet didnt bother anyone back then, but somebody found it now.  Upon researching the @ mention in the tweet, it was identified as part of a conversation with @realSacerdotus, run by the same vengeful, butthurt sociopath, Sacerdotus.

UPDATE:  From August 19-22nd…  CLEAR evidence of Sac abusing the reporting process to get even with or get a one up on people, for childish, petty reasons.  Feel free to share this graphic around. 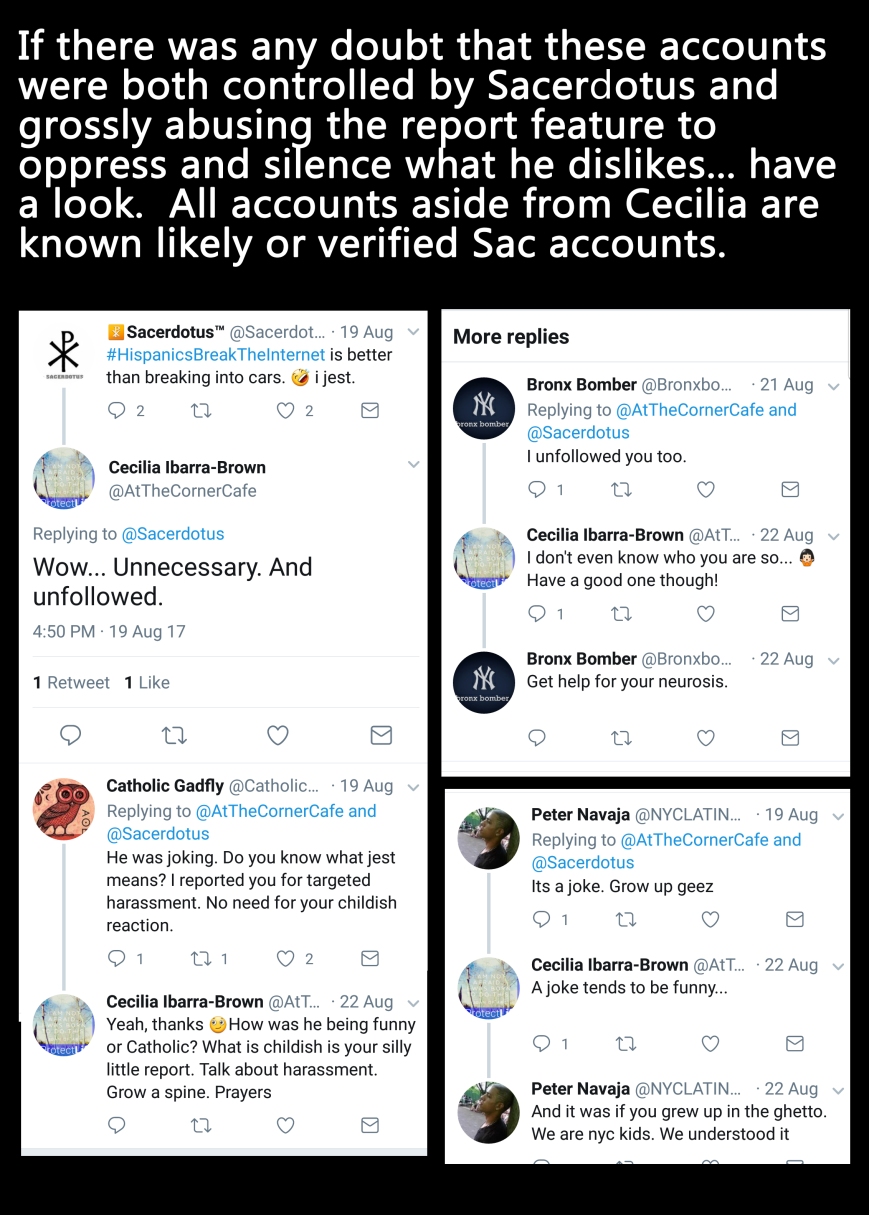